Tyvon Branch Contract: Raiders safety Tyvon Branch agreed to a four-year contract with the Oakland Raiders. CBS Sports reported that the contract is worth $26.6 million with  $17.1 million guaranteed.
Branch was drafted in the fourth round in 2008 and since then he has started every games in the past three seasons. Branch has also led the Raiders in tackles for the past two years. In the past three seasons, Branch has accumulated 327 total tackles and has been a dominate force in the defensive backfield.
I’m glad that the Raiders are finally starting to try and keep their good players. 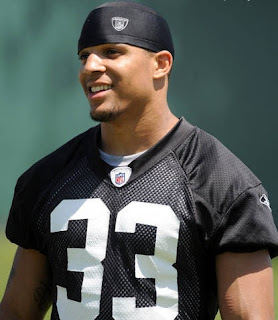